All smartphones could soon use the same charger
Jan 16, 2020
View All Blogs

Earlier this year, Samsung has unveiled the Galaxy M31. Later on, the company has announced the Galaxy M31s in July. Now the company is planning to bring another version in the series. Samsung Galaxy M31 Prime Specs and Design revealed by Amazon. Let’s have a look at the specs of the phone. 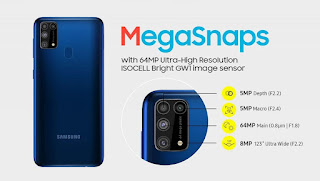 First of all, the phone will be powered by an Exynos 9611 SoC. It will have 6GB RAM. The phone will come in two storage options – 64GB and 128GB. Users can also expand the storage using a microSD card up to 512GB.

Moreover, the phone will have a massive battery of 6,000 mAh capacity. The battery will charge through a USB-C port at up to 15W. The phone will come with four cameras on the back and one camera at the front. Galaxy M31 Prime will have a 32MP selfie camera with slow-motion and 4K video recording. The quad-camera setup on the back consists of a 64MP primary, 8MP ultrawide, 5MP macro and 5MP depth sensor units.

Additionally, the phone will have a fingerprint reader on the back. It will have a 3.5mm headphone jack. This is all that we know so far about the phone.

On the other hand, the previous model of the series have come with FullHD+ AMOLED screens having a diagonal of 6.4″ and 6.5″, respectively. So we expect something similar on the M31 Prime.

As far as the launch of the phone is concerned, the company has not unveiled any information regarding it. We will get the information about it very soon.